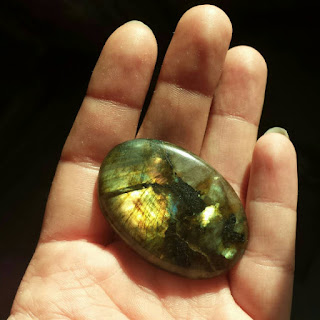 If you've read any of my Healer's Apprentice books (Fairy Gold, To Heal a Broken Planet, or the current WIP Into the Unknown) you know that my main character, Teeka, wears a necklace with a "magic stone" that her mother got from the gillys, the semi-mythical telepathic and telekinetic natives of her planet. The stone isn't really magic, but enhances Teeka's own psychic abilities.
When I first started the books, I based my description of the stone on one in a ring I used to own: a dark amber, with a flash of green fire inside if the light hit it just so. I bought the ring in a thrift shop, and thought, because of its size, that the stone was glass. But I've never found any glass that behaves that way. I later suspected that it was actually a rather large (and perhaps valuable) specimen of andalusite. It's a moot point, as the ring was stolen many years ago, and I also learned that andalusite only shows the color shift if it's faceted. I wanted a natural stone, stream-polished but uncut.
Friends had suggested it might be a good thing to offer copies of Teeka's necklace along with the books. They needed to be inexpensive enough to be marketable, even if I didn't make any profit, but only used them as a bonus with books. After searching for suitable stones, I concluded that it might be necessary to manufacture a fake stone of cast resin, and enlisted the aid of a jewelry-making friend, but what with one thing and another it didn't seem to be happening.
My jewelry-making friend had also suggested labradorite as a possible substitute, but I wasn't impressed with the small beads she showed me. Then I ran across larger pieces on Etsy, and purchased a few. They aren't necessarily amber (although some show glints of that color) but all the samples I've bought do produce the "green flash" which is what I wanted. I still have to determine an optimum size, plus the cost of mounting the stone in a simple wire wrapping, such as my gillys (not much into making things) might use simply as a way to carry the stones. The stones are utilized as training devices for their children.
Posted by Janice Clark at 2:17 PM No comments: