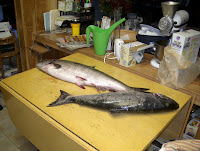 We're well off the beaten path, and rarely get unannounced visitors, so I was surprised when there was a knock on my door early this morning. It was our Chehalis Indian friend, who shows up now and then when he has extra fish to sell.

Too bad my youngest son wasn't available. He's a seafood manager at Safeway, and much more adept than I am at cutting up fish. But I cut them up in my own sloppy fashion, and had an abundance to brine for smoking, to freeze for later consumption, and to share with family. I ate the liver for breakfast--delicious.
Posted by Janice Clark at 4:17 PM No comments:

I'm very thankful I don't have to depend on my garden for sustenance. Not only is the weather often uncooperative--as in the cool, wet spring we've been experiencing--but results aren't always what you hope for.

I like to use bean sprouts now and then, and have learned to do a fairly good job of producing sprouts from seeds, although they still aren't nearly as fat and juicy as commercial sprouts. The next step was growing my own mung beans, so I'd have a supply of sprouting seed and wouldn't have to keep buying it. After a couple of unimpressive crops, I finally managed to grow a healthy stand of mung beans. A fluke, I think, as they really need more heat and sunshine than we normally get. I knew they had to be harvested slightly green, as the dry pods will split and shoot seeds all over. So I harvested, and put the pods in a paper bag to dry out. And there they remained for a year or so, as I found getting the seeds out to be a tedious process.

Today, in a rare moment of enthusiasm for finishing old projects, I looked up directions for threshing and winnowing beans. The tiny amount I had hardly seemed worth beating with a flail or any of the other methods described, so I put them in a bag and crunched them with a rolling pin, like making bread crumbs.

The winnowing instructions said I could take the beans mixed with chaff outside and pour them into a basket, letting the wind blow the chaff away. Why a basket, I wondered? I tried a large bowl, and immediately answered my question. The beans bounced on the hard surface, most of them escaping to the lawn. So I went up to the storage area in the barn loft, found a basket, and proceeded with the winnowing. It worked pretty well, but I still wound up sorting the beans out individually, and discarding the ones that had traces of what looked like mold.

My persistence paid off with a handful of smallish mung beans. I put them to soak for sprouting and hope they'll produce. Even if they sprout beautifully, that was a lot of work for a small amount of inferior product. Scratch mung beans from the planting list.

Since I was trying to finish up old projects, I also dealt with the soy beans. I had noticed that the grandchildren in Colorado (now the grandchildren in Alaska) were fond of edamame. I thought the Washington grandchildren would be interested also. Our first crop was mostly eaten by the local deer, but with higher fences I managed to get a good crop. I blanched and froze them, offering them to the grandkids at their next visit. They turned up their noses at them and requested more cucumbers.

I thawed and shelled a few beans from time to time to add to salads and soups, but that was rather labor-intensive. They nagged at me every time I opened the freezer. Tired of their looks of sad reproach as they gradually became the only veggies left in the freezer, I thawed them all, popped them in the dehydrator, and then proceed to follow the threshing and winnowing process as for the mung beans. They probably shell easily enough when raised to full maturity, but no matter how dry and brittle the pods, the beans still clung to them. Again, a lot of work for a small amount of inferior product. I put my handful of beans to soak for soup.

This year, I planted sugar snap peas and ordinary old green beans--legumes with edible pods.
Posted by Janice Clark at 12:49 PM No comments: