Review of Becoming a Boy by Will Robertson 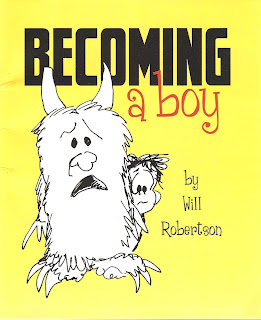 Cartoonists have a rare skill of being able to condense a story, an ironic twist, or a profound truth into a minimum of simple lines and maybe a handful of words.  It’s a step beyond “flash fiction” and way out of the league of yours truly, who tends to write “long” rather than “short.”

Will Robertson, an up-and-coming cartoonist, has published several collections of his daily comic strips.  Now he’s put together a new book, a bit different from the others, which explains the Christian concept of being “born again” in a story as simple and profound as Shel Silverstein’s The Giving Tree.

Most of my friends and family are aware that I classify myself as a non-denominational live-and-let-live Christian.  I treat other people’s beliefs (or non-belief) with respect, and generally receive the same respect for mine.  I don’t feel called to be an evangelist. I do sometimes “preach to the choir,” reminding self-professed Christians of the essence of their religion: love God and your neighbor.  I’ll share my beliefs when asked, but mostly I try to be a living testimony, to “walk the walk” instead of just “talking the talk.” That’s what this book is about, also: the futility of “talking the talk” if you’re not willing to “walk the walk.”

I see this book as a useful tool to reach non-committed sort-of Christians who are teetering on the brink, as well as a reminder to those who have strayed from the path.  I think it would also appeal to kids who are just learning about religion.  I suggested to Will that it’s a form of “sneaky evangelism” because a lot of people will pick up a cartoon book to read for amusement, and get hit between the eyes by the message. As for my non-Christian (and even anti-Christian) friends, especially the writers, whether or not you’re interested in the message, you might enjoy it as a deceptively simple story, beautifully told.
Posted by Janice Clark at 11:08 AM No comments: