The "extras" for The Mirror Door are now up on my website. Help yourselves to the "extra scene" as well as the author interview and study guides. www.janiceclark.net

You'll also find extra items for The Mountains of the Moon and The Door in the Sky as well as the recipes that appeared in the first printing of Christmas Brings Joy to Every Heart.
Posted by Janice Clark at 8:27 PM No comments: 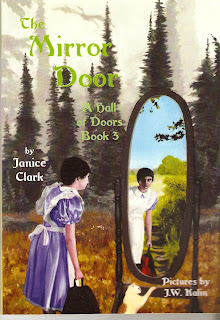 I received a big box of books today. Most exciting, of course, is The Mirror Door, book three in the Hall of Doors series. I've been rereading it, and enjoying the interior illustrations, which I hadn't seen. Artist JW Kalin did a terrific job, as always.

I also got more copies of The Mountains of the Moon as well as Tales of the Slug. Since I still had plenty of The Door in the Sky I'm all set for sales at the bazaar in Oakville (actually the Friends of the Library's community garage sale April 16th) as well as Norwescon, and I can start scheduling book signing events.

Unfortunately, Orchard House Press doesn't have The Mirror Door posted on Amazon yet, and their own web site is still being revised, so any sales will be through me for now. But that's just a matter of time. They did get The Door in the Sky up on Amazon, and there are some nice reviews there.

Speaking of Norwescon, the little

blue man alien mummy whose picture I posted on Facebook a while back is going to be in the art show charity auction, so will help fund Northwest Harvest (food bank) and Clarion West (writers' conference). Many thanks to my grandson Jonathan Kalin for the donation. (Yes, he goes by Jon, but so does his uncle, the artist, which tends to cause confusion.)
Posted by Janice Clark at 8:25 PM No comments: