Review of The Emerald Forge by Manda Benson 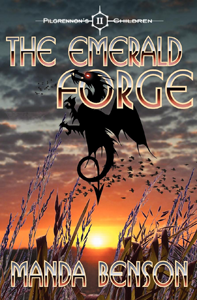 This is a fast-paced thriller/adventure story that hits the ground running and will keep you turning pages until you realize with a shock that it’s over and you have to wait forever for the next one.

The Emerald Forge is the sequel to Pilgrennon’s Beacon, following the continuing adventures of Dana Provine, the product of an experiment by Ivor Pilgrennon, a scientist with a bit of a Frankenstein complex. Dana, who is autistic, has a chip in her brain that lets her talk to computers. In fact, she feels much more comfortable with logical, predictable computers than she does with illogical, unpredictable human beings, and much of the appeal of the book comes from Dana’s attempts to make sense of “normal” human behavior. She is, however, more functional in human society than her similarly equipped brother, Cale.

Ivor, who is Dana's biological father, is missing and presumed dead, but Dana, who had become attached to him when she met him before, has hopes that he’s alive. Her search for Ivor is one of the motivations for the adventure that follows.

Dana’s foster parents, now adoptive parents, Graeme and Pauline, are wonderfully caring, patient people who do their best to cope with the challenges represented by Dana and Cale, but they don’t know about the chips, nor are they fully aware of much of Dana’s activities. School is still terrible, replete with bullies and clueless teachers. It gets marginally better when Dana makes a tentative alliance with Eric, another misfit, who turns out to be the boy Dana had met previously, in a computer simulation. But that connection brings problems of its own, as do all of Dana’s attempts at making friends.

As in the first book, there’s an abundance of mad scientist stuff, including weird biological-machine creatures, patterned after mythical beasts. Super computers and flying fortresses. Remote-controlled animals of all sorts. “Impossible” chimeras, who exist with the aid of nanobytes in their systems. The mysterious girl in Dana’s dreams who turns out to be more of a nightmare. A blind man who “sees” through the eyes of an eagle.

Dana re-connects with her emotionally and ethically challenged biological mother, Jananin Blake, who is now a spokesperson for the meritocracy, the new form of government that has taken over Britain. The two share a hair-raising adventure, which includes some of Dana’s siblings from Ivor’s experiments.

Highly recommended.
Posted by Janice Clark at 1:06 PM No comments: